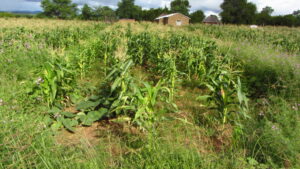 MR Lovemore Moyo, a small-scale farmer in Portbury community in Matabeleland south is set to harvest about six hectares of maize owing to the the exchange visit with the Portbury community to Muonde trust in Zvishavane which was organised by Uluntu Community Foundation.

His two-and-a-half-hectare piece of land is green with crops all over in an area which has typically received poor rainfalls over the years.

The exchange visit to Zvishavane was aiming at equipping the Portbury community members on water harvesting, sustainable livelihoods and sanitation in order for the community farmers to produce adequate crops even in the middle of dry seasons through teaching them on ways of preserving water in their farms. 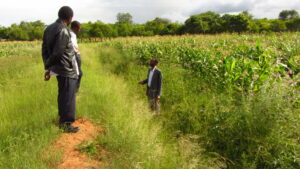 Dead level contours are channels dug in the fields with a zero gradient or slopes so that water does not flow out, but is harnessed and stored in the channel. They are made using V or A shaped wooden sticks with a pendulum in the middle, called A-Frames.

According to Moyo, this method of water harvesting and preservation should be practiced by every farmer because it increases yields as most of the water is contained within the fields, which is an advantage since Matabeleland South generally receives poor rains every rainy season.

“If you know that you are a farmer and you don’t know about dead level contours, you are at a risk of starving during dry seasons. All farmers should have dead level contours in their fields so that they are able to produce with the smallest amounts of rain,” he said.

Moyo and the other members of the community also learnt sustainable livelihoods. Here they were equipped with skills on fruit tree production along the dead level contours so that the trees are naturally irrigated.

This year promises to provide Mr Moyo with twice the yield he produced the previous year. He estimates that this year he might harvest about six tonnes of grain, which is a massive improvement from last year’s three tonnes.

Muonde trust was registered in 2014 after realising the need to conserve soil, prevent run off, erosion and riverine siltation in Zvishavane. It launched community-based woodland management projects, water projects and indigenous seed exchange projects in the area.

This training was meant to teach the Portbury community on conserving water in low rainfall seasons in a bid to boost maize production which would improve the foundation’s hammer mill project within the community.